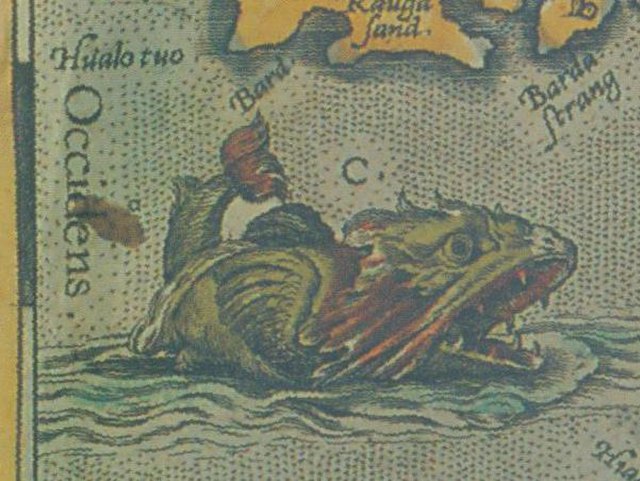 “Whoever fights monsters should see to it that in the process he does not become a monster.”  – Friedrich Nietzsche

How might two Icelandic maps, drawn hundreds of years apart, connect perfectly  to the changing landscape of education? The first is a modern day 5-minute scribble by a tourist.  Whereas legendary Flemish cartographer Abraham Ortelius is responsible for the second.

Six years ago, a tourist sent a letter with no address.  Not knowing the address, the sender drew a map by hand on the outside of the letter’s envelope.  Accompanying the illustration was a city name and the description which read,“A horse farm with an Icelandic/Danish couple and 3 kids and a lot of sheep.” The fact that the city has less than 300 people is less important than the map maker’s good faith. Further, the Icelandic postal service’s willingness to deliver the unaddressed letter clearly depicts the beauty of  familiarity. And yes, the letter actually arrived!

Dating back to the 16th century, “Islandia” is considered the most revered printed map available.  Ortelius is credited not only with this creation but is also responsible for Theatrum Orbis Terrarum (“Theatre of the World”), the earliest modern atlas.  In Islandia, the  sea swarms with seventeen menacing looking creatures. Each is labeled with a letter and on the back of the map are descriptions like:

Education as we know it today has some “monsters.”  Problems which arguably are of mythological proportions.

A New Narrative is About Redesign, not Resolution

For early mariners, what lurked in the ocean depths induced trepidation.  Such unchartered waters are akin to education’s uncertain future.  Jeremy Lent, author of Web of Meaning theorizes how “the pervasiveness of technological change is tearing apart norms that have been entrenched for centuries.”  The cat (new ways of living and learning) is out of the bag!  Is education as we’ve known it in a state of total makeover, or takeover?  Regardless, days are numbered for the industrial model of education built upon compliance.  The new narrative requires not only critical thinking, and problem solving, but also the budding of a collective intelligence, if not connected consciousness.  Only then might we begin to navigate around, over, under, and through the many “monsters.”  The leviathans might be one or any combination of a broken social contract, the effects of artificial intelligence, gene editing, rising sea levels, climate disasters, and civilization collapse. Each demands resolution yet a future imbued with fear would be better shaped by redesign. One guided by wisdom but also choice.

A Future Free of Monsters

The nature of transition is one of uncertainty. Education as a system is in a state of flux, if not decay. Knowing fully well that which we do not wish to recreate, such an opportunity to “redesign” rightly wells up in us, feelings of excitement. If anything, the past few years serve us well as a testament to the resilience of societies. Equally, we have looked on as trends move towards democratization and burgeoning decentralization. A glimpse of “the possible” continues to  become focalized.  Think Mastery Transcript Consortium. With this, more students are being empowered to determine paths of learning that are more exploratory and less dictatorial.  Further, a myriad of learning models continue to muster a new way forward.

Four hundred years ago monsters were included on maps. Approximately three hundred years ago “modern” education was birthed. A monstrosity in its own right, as the model supposedly copied from a Prussian model was “designed to create docile subjects and factory workers,” according to David Brooks, writer for the New York Times. Though it may be enticing to contemplate a future free of monsters, it behooves us to instead center our attention on leveraging the accelerated change we are amidst. And then to amplify such precepts as relationships, creativity, and meaning. A future where more unaddressed envelopes are received won’t just happen. It will take a deliberateness in community creation, shared vision, and a continued awakening to possibility.  The choice to live and learn purposefully and collectively, is ultimately just that.  A choice!