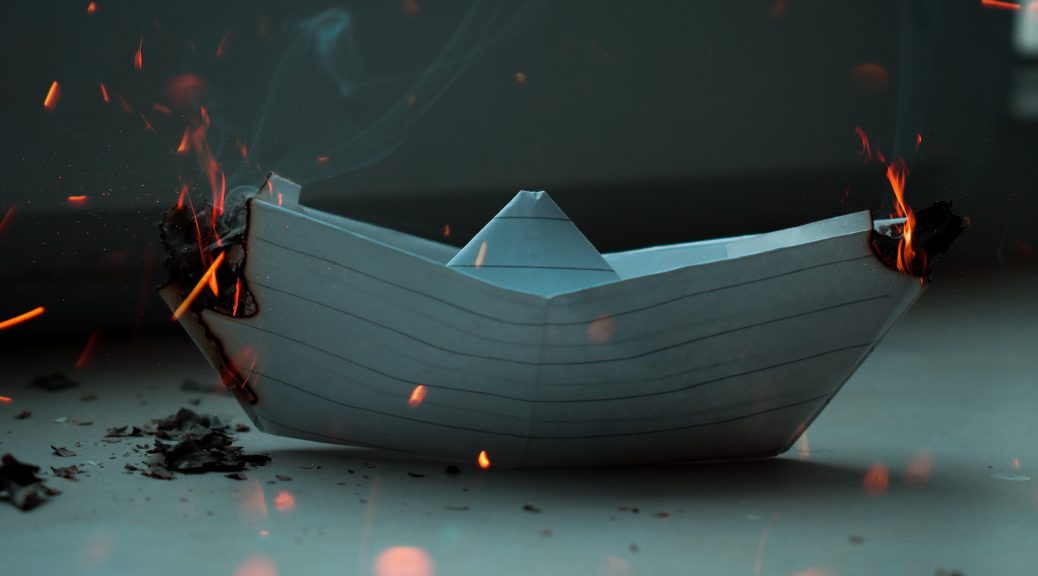 There is good reason why Newton’s third law did not state, “What goes down must come up.” Two sunken ships more than 6000 km apart, are case in point.  Both will remain on the ocean’s floors, a distant 3,000 meters down but for very different reasons.  The first, protected and memorialized for its historical importance is also a symbol of perseverance, more valuable than any of its remaining contents. The other ship, a modern day toxic catastrophe.

As different as the two are, both have parallels to the field of education as we know it. Not just because some may say the system of education is fraught with challenge and ostensibly sinking.

Exactly 100 years to the day of Sir Ernest Shackelton being buried on South Georgia island in Antarctica, his ship The Endurance, was found.  After being trapped in dense pack ice for nearly a year, the ice floes opened, and the sea ice crushed the ship, eventually swallowing it up.  Shackleton reportedly cried out, “She’s going, boys!” At this time, Captain Frank Worsley recorded in his diary his best calculations of where the masts and hull were last seen.  Poor visibility on account of harsh weather did not allow for estimating the direction nor speed of the floes. Yet, more than a century later, The Endurance was discovered only 4.16 nautical miles from Worsley’s calculation!

In effect, The Endurance did not drift much. Nor has the system of education. Its foundation poured in the later half of the 18th century, is oddly enough, about the same time Shackelton was of schoolboy age. Never distinguishing himself as much of a scholar, author Roland Huntford alludes to how Shackelton was “bored” by his studies. Shackelton was even quoted, “I never learned much geography at school … Literature, too, consisted in the dissection, the parsing, the analysing of certain passages from our great poets and prose-writers … teachers should be very careful not to spoil [their pupils’] taste for poetry for all time by making it a task and an imposition.”

Who would have imagined that arguably the greatest leader of all time would reflect on how “school” seemingly stood in the way of his learning?  Yet still, he managed to hone his skills of compassion, strength, and bravery.  And what about Shackelton’s mastery of developing camaraderie and decision making?

All the fervor around competency-based learning is legitimized as we transition away from mere atomic disconnected facts and towards unity, connection, and application. Students “showing what they know” as they transfer learning.

The Endurance drifting little amidst such extreme conditions, in effect helped with the ship’s preservation. Autonomous underwater vehicles (AUVs) recently captured images of century-old ropes, tools, and notably the emblazoned letters “E-N-D-U-R-A-N-C-E” completely intact on the stern. The frigid temperatures, darkness, and low levels of oxygen all contributed to little weathering of the craft.  Further, the absence of wood-eating microbes in the Antarctica seabed surely helped too.  This is not to say we should keep our classrooms cold, dark, and static.

A Passive Approach to Disaster

Robert Frost, considered whether the world would end in fire or ice.

“From what I’ve tasted of desire

I hold with those who favor fire.”

Just weeks before the Endurance was found, The Felicity Ace was lost.  Fire the element taking the ship down.  A vessel more than four times the length of the 144-foot Endurance.  The three-masted Endurance is a complete contrast to the bunker fuel burning behemoth.  The Felicity Ace carried 2,200 tons of fuel, 2,200 tons of oil, and up to 17,000 metric tons of cargo.  The sinking cargo aboard the ship all the talk; not the waters, reef, and seabed they would eventually pollute.  4,000 luxury vehicles, some of which carried lithium-ion batteries for electric cars, went down.  The ship’s manifest listed more than 1,000 Porsches, 200 Bentleys and dozens of Lamborghinis.  An approximate dollar value exceeding $400 million.  But what of the destruction and environmental risk? Are we morally able to put a dollar value on it?

The situation with Felicity Ace is synonymous with the acceptance of  a status quo of education.  Regardless of tides and currents but also any hazards that might prevail. To merely observe when ecosystems are at risk. Fish, plankton, and our very own children. A passive approach as evidenced in a fire that would burn for two weeks, eventually leading to the demise of the “Blissful” Ace.

In the case of The Endurance, the ship was trapped, crushed, abandoned and eventually sunk after 10 months. The value of finally finding the Endurance but deciding to leave it under water, can be ironically juxtaposed with the cost of keeping the Felicity Ace and its thousands of fuel-filled cars amongst the fish. The Endurance centers on respect and all that may be learned. Of great historical value, there is significance to leaving it literally in the darkness of the Weddell Sea.  Instead of being “monitored” as a toxic risk like the Felicity Ace, the Endurance is being protected.  The historic site is safeguarded under the Antarctic Treaty which ensures it will not be touched or disturbed in any way.

Schooling may be sinking, yet learning remains afloat. With excitement might we look upon the near and more distant past as opportunities to become wiser. Stories of sunken ships, fire and ice which in essence might stir our imagination.  Of yesterdays and todays.  Informing but infusing tomorrow with Felicity, Endurance, and hope.