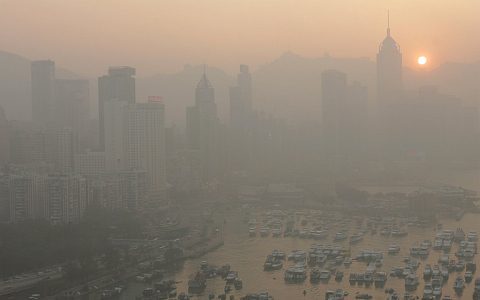 When I lived in the Middle East, we had ‘rain days’, when it poured enough to render the roads unsafe for students to venture out, and school was cancelled. In Colorado, we had snow days. In Hong Kong, we’ve got typhoon days. We also have days when the air pollution is so high that children must stay indoors.

I recently spent a solid week inside with my toddler because the air was too poor to consider leaving the house[1]. One evening, the app that shows me our current air quality (I check it way more than I look at Facebook or Twitter), said the “air” was 323% more polluted than the World Health Organization’s maximum safe limit. I cranked up the purifiers and drummed up as many indoor baby activities as I could. At one desperate point, I started shopping around for flights to someplace fresher. Developing children are too susceptible to take this risk with.

There isn’t a standard international way to measure air pollution, nor do we agree upon what to measure or how to interpret the results. Schools, if they have a policy in place around air quality, typically rely upon government-published data, the reliability of which varies. It can be easy to assume that, unless a thick fog is visible (and you don’t live in India or China), smog isn’t an issue. However, air pollution – often invisible and odourless – is present in higher levels around the world than you might think. This mesmerizing website, by the World Air Quality Index project, debunked some of my assumptions about where to go for clean air[2]. Indeed, the WHO has concluded that, in 2014, 92% of the global population was living in places where air quality guideline levels were not met[3].

Is it the responsibility of schools to protect students from exposure to air pollution? I’ve heard of some campuses with ‘bubbles’ built over their play spaces so that children have room to run without being outside, exactly. Some schools install air purification systems in classrooms. And some simply hold indoor recess for as long as it takes for the haze to pass. Unlucky is the asthmatic child whose condition has landed them on a list of students who stay inside in all but the best conditions while their peers hit the playground without them. But really, should any of them be running around in questionable air quality?

What precautions does your school take to protect students from the harmful effects of air pollution?

[2] As I write this, air pollution readings are triple those in Hong Kong at a station in British Columbia, and at another in Italy.