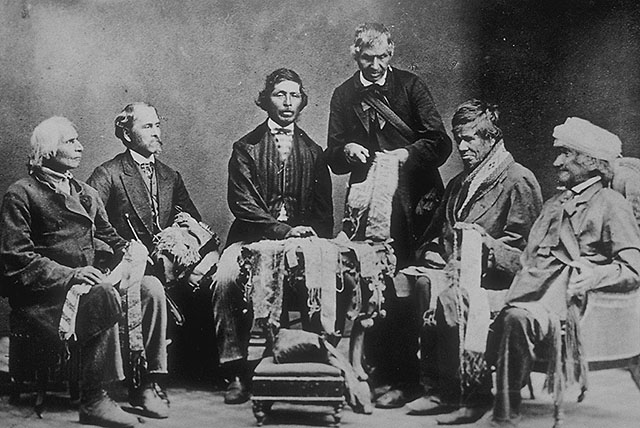 Poquaûhock sounds better than “clam.” Translated “horse fish,” this was the word used by the Narragansett people, an Algonquian American Indian tribe from Rhode Island, to refer to the “quahog,” an edible clam with a very hard shell.  The Atlantic Ocean-dwelling native is of much greater historical importance than an addition to a chowder. The shells of the quahog were initially invaluable in the creation of tools, for storytelling and for recording important historical events and treaties. Beads of the polished quahog shell were crafted and strung in strands, belts, or sashes called wampum.  And wampum belts sometimes were symbolic of ongoing treaties.  So treasured, First Nations’ wampum became Massachusetts’ first legal currency.  The species name mercenaria is even related to the Latin word for commerce.

Yet, with such rich history there is even more to marvel. Inside the marine bivalve mollusk is a soft-bodied invertebrate. One that can live upwards of 500 years! Besides living in intertidal zones and the adaptability this may showcase, the mollusks behavior is one we might stand a chance to learn from. There is a sort of simplicity, a slowing down of time that anthropomorphically must result, as they spend their entire lives in an immobile and isolated state. Yet, the clam is capable of burrowing down or even migrating small distances if in danger.  Otherwise, they remain steadfast. Possibly for centuries!

This is not about becoming more like mollusks. Rather, a glimpse into what behaviors we might begin to bolster, in order to have longer but also improved lives. Moreover, lives where we do not simply exist, but relate as individuals, communities, and to all other life forms.  Connected, balanced, and in life’s flow, symbiotically moving with purpose and defined by shared values.  Slowing down may just be the secret ingredient. Daniel Christian Wahl, author of Designing Regenerative Cultures attests to how we have much to gain when we envision time differently, “A new cultural narrative is emerging, capable of birthing and informing a truly regenerative human culture.” Underlying is a notion of what may very well be our greatest currency, time. The pandemic assisted us in understanding this. Time to pause. Time to reflect. Time to spend time with family. To take more walks. An opportunity to realize what matters most. The frenetic mornings, claustrophobic offices, occupied minutes and hours in traffic and meetings better served as memos. A dawning realization, akin to the sunrise, of primordial potence.

Find More Than Humanity When We Slow Down

National Geographic explorer Paul Salopek, is retracing the journey of some of our human ancestors’ migration beyond Africa. Called, Out of Eden, Salopek is In his tenth year along the 24,000-mile odyssey. Humble Salopek repeatedly seems to pen the phrase, “I am walking across the world.” Said in passing much like one might say, “I’m going to stop by the store.” In the  tenth year of ambling, Salopek is currently in a Tibetan autonomous county in Sichuan Province. In a recent story Salopek shared how this fictional dreamland of Shangri-La was inspired by James Hilton’s 1930s novel Lost Horizon. “Hilton wrote breathlessly of the Shangri-La lamasery… It was a redoubt of ‘utter freedom from worldly cares’ where time paused and people lived for 250 years.”

Half the life of the quahog!

Though there is no univocal definition or description of Slow Journalism, an ambition of speed is absent.  So too are oversimplification and stereotyping.  Walking is the preferred mode of transport, in effect forcing one to slow down and observe carefully. One of the catchphrases of Out of Eden is, “Slow down, find humanity.” I am certain from reading the philosophical Salopek’s writings, what is learned goes beyond the limits of just finding humanity. Possible because time is re-imagined.

A Look to the Trees

German Nobel Prize novelist and poet Hermann Heese is remembered for his body of work centered on an individual’s search for authenticity, self-knowledge and spirituality. In Heese’s ​​1920 “Collection of Fragments,” one passage especially stands out, attesting to the power of time.

“When we are stricken and cannot bear our lives any longer, then a tree has something to say to us: Be still! Be still! Look at me! Life is not easy, life is not difficult. Those are childish thoughts… Home is neither here nor there. Home is within you, or home is nowhere at all…

So the tree rustles in the evening, when we stand uneasy before our own childish thoughts: Trees have long thoughts, long-breathing and restful, just as they have longer lives than ours. They are wiser than we are, as long as we do not listen to them. But when we have learned how to listen to trees, then the brevity and the quickness and the childlike hastiness of our thoughts achieve an incomparable joy. Whoever has learned how to listen to trees no longer wants to be a tree. He wants to be nothing except what he is. That is home. That is happiness.”

A New Currency of Connectedness and Time

That we might take the time to root ourselves, like the trees. Trusting and patient. Wise, listening, and connected.

In my third year living in a Southeast Asian city of upwards of 15 million inhabitants, concrete prevails more than the trees. Yet, I have repeatedly retreated to lone trees, as forests are seldom to be found. And I have received confirmation. A message of hope, remembrance that I am fortunate to have a life of choice. Conscious and unhindered, I am both imbued and revitalized by responsibility. Embracing uncertainty and ambiguity, while synchronously returning to a less complex story of unity.

One where we are reminded of a new currency, connectedness and time.  Where quahogs and trees are more than mere metaphors of life and longevity. A purposeful and promising path forward.  May the summer help us all reimagine time.