Lady Gaga has 83.2 million followers on Twitter. The Dalai Lama has approximately 20 million. Cap’n Crunch, the iconic sugary cereal mascot of my youth, has 790. The Weather Channel, 3.8m.

Our ‘truths’ seem to be measured in likes, views, followers and retweets. Visibility, casting itself as the gatekeeper of what we want to believe.

Much has been written about the polarization of people thanks to algorhythms that suggest more of what we want to see and hear. This keeps us in a comfortable, likable, predictable (and dangerous) bubble. Your customized news, entertainment, sports and cultural sources are all here to serve…you.

Kara Swisher the host of the podcast “Pivot,” recently said that ‘feelings are not facts.’ In other words, you cannot just decide not to believe something because you don’t like it or it’s not convenient. You have to do some work.

We used to rely on the teacher, the priest, the judge, the parent, the text as those sources of credibility because they were close to us, visible in the community, tangible and accountable to those around them, and invested in the truth.

Now, that person or information source doesn’t have to be visible to the naked eye or touchable. Credibility is now in the form of upward thumb signs, followers, and shares, a true democratization of what people want rather than what they need to believe. I even read once that most celebrities and influencers don’t even manage their own social media accounts! Can you believe that?

Twitter is starting a crowdsourcing service called ‘birdwatching,’ where, similar to Wikipedia, people can become certified fact checkers and contribute to a credibility rating for postings that trend. On one hand, it’s nice to feel that people are empowered to contribute to truth. On the other, it opens up a world of possibility to those that want to shape others to their versions of what is true.

I belong to a social media group that posts a lot of messages about bikes and bike repair. Lots of people weigh in on a lot of ideas about things from derailleurs to seats to tires. It’s tempting to go with the most liked advice on the best seat to cross Siberia but no one is saying, ‘seats are dumb and don’t exist.’ We all have that basic agreement.

When I was teaching in the 1990s, I used “Lies My History Teacher Told Me,” (by James Loewen) and “A People’s History of the United States” by Howard Zinn to offer research based alternative views on factual events. These texts gave voice to the unheard, portraits of actual events that were not invented, but omitted. They made things already credible visible, not credible because they were visible. My students had the opportunity not to decide what to believe (because it was all true), but rather base their opinions on the facts in front of them, contrary as some of them may have seemed. It was also a quieter time, when the information age was only a trickle, allowing students to consider a couple of truths and deciding where to land before they moved onto the next question. Now, it seems as though the firehose is fully opened.

It’s not easy to resist something that has 2M likes or retweets. The visibility, the comfort in knowing others agree, is so human it’s hard to resist. We think something is cute, inspiring, sad, dangerous and we cannot help but to believe it because it makes us feel a certain way.

Feelings are not facts and credibility is not always visible. It takes hard work and a willingness to look past what is easy or agreeable to make up our minds about basic truths that we need to accept in order to keep learning on course and communities together. 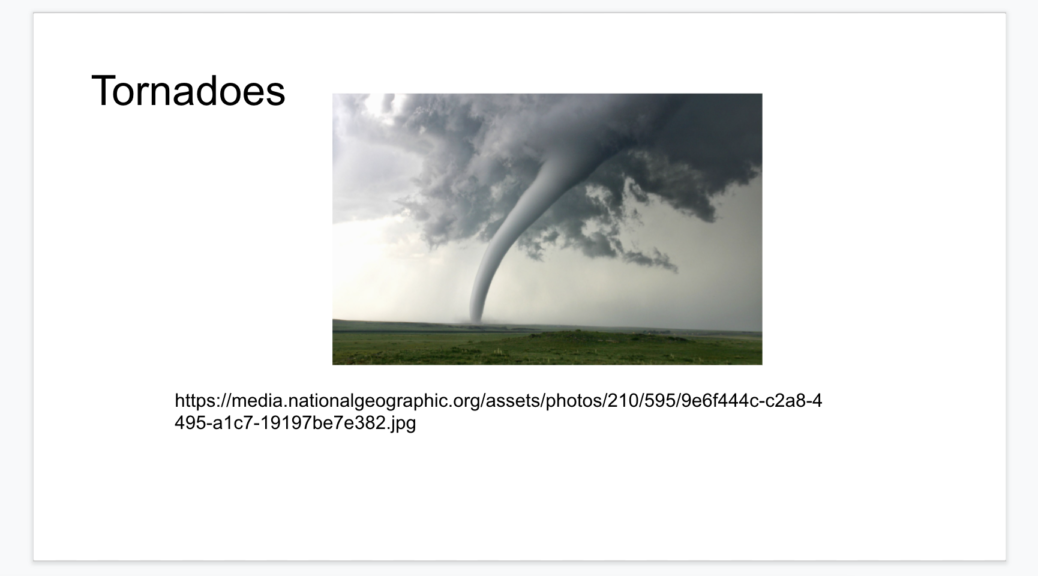 Has any elementary school student in the history of the world tried to sell their Google Slides project to anyone? No you say?  So why do elementary schools spend time each year forcing students as young as 2nd grade to attempt to follow arbitrary citation formats for images they re-use after grim, confusing lectures about “Copyright” from the head of the class?

We’ve all seen it: the three slide presentation with a title, a few sentences, an image or two and then the attempt at a citation, usually below the image which then mars the aesthetics of the student’s work.  Instead of focusing on how to use the tool, to format things for readability or follow design principles, we get nine year old novice keyboarders taking eleven minutes to mis-type a URL. I walked in on this “copyright/citation lesson” so many times as a tech integrationist; you could literally see the enthusiasm for both the subject and the technology draining from the student.

The idea of dropping citation instruction from elementary digital learning programs will cause some serious pearl clutching among some of our media center and teacher colleagues, and let’s be clear—nobody is saying you can claim another’s work as your own, that is common sense.

What is not sensible is the way “copyright” is almost universally mis-taught in schools.

As “taught”, it not only discourages kids from following their natural inclination to be innovative and inquisitive using digital tools, more importantly, the endless focus on copyright denies the stronger argument that almost everything a student does as schoolwork falls under “Fair Use” and would be/is therefore exempt from any/all copyright claims in the first place.

In US law, fair use has four broad categories. They are:

Fair use is almost always granted if it is noncommercial, for schoolwork or education and not being used to try and make money, obtain views, etc.. As well, re-purposing an image is not using the entire article, webpage, etc., as your own.  Student reports are not meant to be public repositories to inform others about penguins or cats or tigers, and when students use images and information in their assignments, it’s nearly always for non fiction work, which is almost always granted fair use.

At a minimum, schools should be balancing the boogeyman of copyright with the freedoms of fair use.

What is nearly as frustrating as the focus on copyright over fair use is the tone deafness to the fact that Western culture largely rests on and is entirely enthralled by sampling, reusing and repurposing material. Popular entertainment is so often based on sequels and spinoffs, rehashes and remixes!  We should be encouraging creative transformation and re-use in schools, not haranguing primary school kids about copyright.

The good news is that some things can be improved by actually doing less, not more! Please pass this link of resources from the Electronic Frontier Foundation (EFF) to your teachers, your integrationists and your media center colleagues. Because, to cite the Foundation’s main point behind creating the resource, “Students need fair use information, not copyright intimidation.”